Leos and Tigers and Bears

It's official - I am now assdeep in planning a literacy event that I somehow, in a weak moment, volunteered to chair for Olive's precious preschool. The emails, they's a-flying, and if I have to set up one more meeting between now and next Monday, I'm seriously pitching a tent on campus til the whole thing blows over. Which, based on the personal letter he sent T-Bone about saving the polar bears, would probably make this guy really happy: 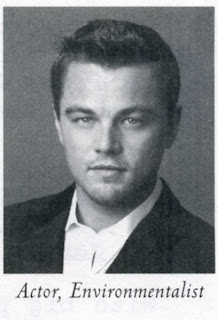 Wha? You mean you didn't get yours? I just knew it was from Leo the minute I saw the envelope:

He don't need no stinkin' return address! Why, that dude's so green, he just lives on movie sets and in his electric car. His earnest prose and leading-man good(?) looks convinced me, by God, so I will soon be the proud owner of a smart new polar bear tote bag. And probably on the mailing list of every tree-huggin' outfit on the planet. For now, I think I just might add this to my collection.

Posted by La Turista at 9:28 PM No comments:

What an Easter-y weekend we had! Olive had an Easter party and egg hunt at school on Thursday, and then she and Peach eagerly awaited sundown so Peach could indulge in the joy of dessert once again, having given it up for Lent. Sweet baby, she took it very seriously - after T-Bone gave her an Altoid after dinner one night, she held it up and said, "Lord, forgive me if this is dessert!"

Saturday, we hit another egg hunt, and both girlies came away with several candy-filled eggs and various other prizes, including the chocolate bunny Peach won as the clean-up runner for her team in the egg-on-a-spoon relay. Y'all, she made up a whole leg for her team - I've never seen her move so fast! And smooth! We may need to rethink this ballet stuff and look into track. UT did just raise tuition AGAIN, so a scholarship would be sweet ...

After the annual coloring of the eggs that afternoon, we had dinner with our dear friends, The Televisions, and the kids had a ball with the two dozen cascarones I brought. Mrs. Television is from Michigan, so she had never even heard of a confetti egg until I introduced them to her a couple of years ago - I just think that's so funny. By the time we embarked on the 40 minute drive home, we were all sufficiently stuffed, stinky, and soon thereafter, asleep. I always forget how much more people weigh when they're zonked and you have to carry them upstairs. My apologies to everyone who has ever attempted to carry my fat ass anywhere.

Sunday brought a beautiful day and bountiful baskets, as well as numerous photo ops in our bodacious bluebonnets: 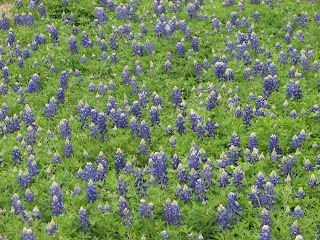 They came back bigger, brighter, and even more badass than last year, and I have to say, we're pretty spoiled to get such a showing in just two years. So come on over with your cameras and your childrens. And beer would be nice, too.

Posted by La Turista at 7:26 PM No comments:

Since no one guessed these movies, I suggest y'all get out and rent some of these mofos - you don't know what you're missing!

1. Used Cars - Come on! Kurt Russell and Jack Warden? I love this tagline: Estimated Laugh Count: 287 City, 410 Highway. Use these numbers only for comparison. Your actual laughs may vary depending on how you feel about used car salesmen, nude women, spectacular car stunts, and the President of the United States. (But really, you have to see this.)

2. Glitter - Yes, I saw it. At the movies. And it wasn't a matinee. Just one in a long line of awesomely bad flicks that Karla May and I have seen, on purpose, either at home or on the big screen. Or both. I think Malcontent Mama was with us on this one - or was it Bring It On?

4. A League of Their Own - This was Madonna's line, and in a future post, I'll tell y'all the story of my great aunt, who played in the AAGPBL, and was in this movie, and was a big hit with Her Madgesty, who then insisted that the two take a picture together: 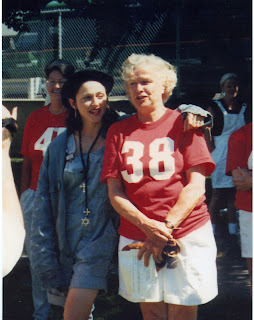 5. Field of Dreams - People! This was Burt Lancaster, talking about his short-lived baseball dream. Omigod, I have seen this movie, or at least parts of it, about 10,ooo times, and I weep - WEEP, I tell you - every friggin' time. And I don't even like baseball. Or Kevin Costner.

6. U2: Rattle and Hum - This was that sexy devil, Adam Clayton, in one of the only concert movies I'll watch. It came out at the height of my obsession with Bono, and I knew I'd love him forever after they showed their trip to Memphis. Which brings me to ...

7. Change of Habit - The King's last movie, in which he plays a doctor trying to clean up the streets with the help of three undercover nuns-to-be, one of whom is Mary Tyler Moore. Seriously. It's a "drama." With only three songs. And Ed Asner. I had never seen this particular E vehicle until I met T-Bone, who has his own personal copy. Yet another reason I love the guy.

8. Slacker - Way back before the big Tech Boom, and the even bigger Tech Bust, and before every hipster wannabe asshole in California decided it would be "cool" and "cheap" to live in Austin, this sleepy little town was just like this movie portrays it to be. I knew people in the movie, and I knew people just like people in the movie. I even went to "the premiere" at Dobie, for those of y'all that that means something to. I like to revisit this little piece of history now and again, but every time I do, I see yet another place that is now literally gone, obliterated, and erased so some dickhead developer can build more hideous high-rise condos and lofts that no one can afford and only serve to muck up my skyline. Great flick, though.

So that's it. I thought most of these were so obvious, but I see now that I have spent far too many hours, planted on the couch, sobbing into my popcorn bowl as Sally Field gives that GD speech after Julia Roberts' funeral AGAIN.

P.S. The title of the last post came from No Country For Old Men - it was one of my BIL's lines, remember?! And #11, which T-Bone posted in the comments, was from Diner. Yeah, I didn't get it either.

* This just in - as I was writing this post, it seems that Karla May finally got her ass around to really reading the last post, so I have to give her belated props for correctly guessing 2, 5, and 8. You may also keep the BBFF anklet I gave you for your bday one time.

Are You Going To Shoot Me?* (Now With Hints!)

For lifting this movie meme from one of the many people who posted it much sooner and much better than me? But I love it so. And I'm the one fishing for some comments from the peanut gallery, assuming there is a peanut gallery out there ... anyone? Whatever, I enjoyed putting it together.

For those of you who haven't been playing along at home, here are memorable lines from some of my favorite movies, and your mission, should you choose to accept it, is to make guesses in the comments, and then I give you all kinds of props and whatnot when you're right. Sounds so awesome, right? Let's go!

* Bonus points, and possibly alcohol, for the cinematic genius, and very dedicated reader of this blog (hint), who correctly guesses which movie this line came from. (2007 - brotherly love)
Posted by La Turista at 9:50 PM 9 comments:

I am so over you and all of your bullshit. Specifically:

Posted by La Turista at 9:35 PM No comments:

What I Did On My Spring Break Vacation

Went here. Many times. Trust me.
Posted by La Turista at 8:54 PM No comments:

Normally, I try to avoid and discourage forwaded and/or lawyer jokes, but it's cold and rainy outside, and this made me laugh:

Warning Signs that You Need a New Lawyer:

I'm pretty sure I graduated with that guy. And he was already disbarred two years later. Idiot.