So, The Trip Report

On the heels of the coldest winter in 40 years, it was pleasant and beautiful last week in our little Colorado burg - cold, even. A couple of days, it didn't even get above 50 degrees, a full 50 degrees cooler than it was (and still is) here at home. What is up with THAT? Anywho, the weather was great, and we found plenty of snow for sledding and snowballs. Our raft trip, however, was cancelled due to freaky high winds, but we did hit the stables a couple of times. Olive met up for Round Two with Spirit, who has gotten so fat, he is now being trained to pull a cart so he can shed a few lbs.. He's still a sugah, though. And Olive has informed us she has "finally decided" that when she grows up, she is going to be a wrangler there. Glad we got that settled.

No trip to CB is complete without a visit to the grooviest pizza joint on the planet. Seriously, look: 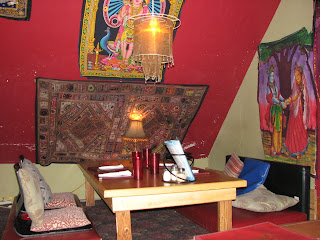 Why yes, you do sit on the floor. And the pie is delish. Namaste, y'all.

Also, T-Bone and I got to see the new Indy movie (loved it!), and we took the wee ones to see Kung Fu Panda (skedoosh!). Somebody beat me to my million dollar idea of bringing back the town theatre as an Alamo-type venue, but they've gone heavier into the booze area and not so much with the food yet. Not that I'm complaining. Now I'll just have to redirect my efforts to live there part-time into my other money making scheme - opening a kickass raspa stand there in the summer. How awesome would THAT be?!

On the way out west, we spent the night in Carlsbad, and indeed, we went to the Caverns. The bat show the night before was (according to Olive), "utterly boring," so I'd skip that if I were you. Especially if you've ever seen our bats - so much better. The Caverns themselves, though, were just as cool as I remember from when I was 10, and my little rockhounds couldn't get enough. They walked over two miles and were way too busy to complain. And how often do you get to say that you went potty 750 feet underground?

We also spent one night in Taos and went to the Pueblos, which I had never done before. It was so very interesting, and the colors were beautiful, natch: 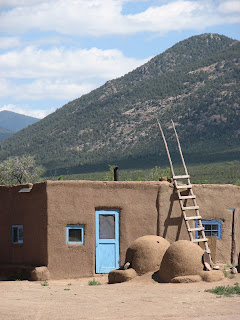 And guess who we saw in Santa Fe on the way back? After 1o hours in the car, we needed a reward, so we stopped at Pasqual's for a late lunch, and Little Miss Samantha was there, filming her show. She's pretty cute in person, and Mama Turista totally accosted her, asking her if she "ever eats anything! So tiny!" Peach was enthralled with the whole process, and since the joint is so small, I'm sure she's in a shot or two. If we didn't collectively look like crap on a stick at the time (and if I had remembered to bring my camera in), I would have gotten some pictures, but no. Just imagine a sweaty Amazon (me) standing next to Tinkerbell (Sammy), and you get the idea.

Now we're back home, but I'm off again tomorrow. Peach and Olive are in "information" bible school this week, so T-Bone is in charge, and I've got to go to the State Bar BoreFest in Houston. Yes, I'll allegedly be entertained and educated by the likes of her and him, but thankfully, my best friend from law school will be there, no doubt with a flask in tow. God bless her. Mama Turista's bringing las ninas down on Saturday for a few days, but I'll be back in time to douse my crunchy grass and tinderbox plants before the fireworks go off, so until then, peace!

I do enjoy me some Onion news, but these three videos from the Onion News Network really spoke to me this week.

After a particularly harrowing visit to the pediatrician with Olive this week, which included a surprise booster shot and the requisite fallout therefrom, I asked her later if she would promise to forget the whole horrible incident, and she whimpered, "Yes, Mommy. I forgive you." Broke. My. Heart. Until I saw this:

Next, y'all know I'm a huge drama geek, right? And you still tolerate me anyway, right? Well, this brilliant piece of "news" speaks to me on so many different levels, I can't even tell you:

And finally, I've spoken with you people before about some of the more disturbing food trends being thrust upon this already portly country of ours, so truly, this is only a matter of time:

We've been home for nearly two days now, and so far, all I've done is four loads of laundry, had an MRI on my gimpy neck/shoulder, and had my face poked with a hot needle at the dermatologist (and yes, it did feel just as lovely as it sounds). Results on the MRI will be in next week, but I am just so glad to get it over with - I could have very easily talked myself into losing my shit when I was put in "the tube," but I just closed my eyes and thought happy, happy, shallow breathing thoughts. And sweated like a mofo. My annual skin check went well, although a mole on my leg that we've sliced up before is coming back, requiring the potato peeler routine next time, so I've got that to look forward to. We've gone to the grocery store and the credit union, and, I think, we've talked the cat back down off the ledge in her cray-zee mind (She hates it when we leave. Specifically, she hates it when T-Bone leaves.). I've gone through the mail, the emails, and the phone messages, and I've almost caught up on my blog reading. Finally, I tossed a couple of plants that have been reduced to ash as of late, and I've administered last rites to the front yard. Scorched earth, indeed.

Trip report to follow - now with celebrity sightings!
Posted by La Turista at 4:28 PM No comments:

Well, we're off to see the blizzard. For reals, they've been having snow advisories! I'm at that point where I've packed and planned and fretted so much that I'm like, tohellwithit, if we've forgotten anything, we'll buy it when we get there. In my defense, packing for temps from the 100s to the 20s is quite challenging, and I'm sure, as per usual, we'll have at least one occasion where Peach and Olive will be completely inappropriately dressed for the weather. Hence the plastic bag "snow shoes" we made last year to "waterproof" their tennis shoes. I'm still hearing about that one.
Posted by La Turista at 7:37 PM 1 comment:

Guess what? It's HOT outside. Like, my plants are literally smoking they are burning up so bad, especially the ones that get full-on west sun laser rays of death every afternoon. It's pitiful. I really think I might get some of these or maybe one of these.

Guess what else? Tomorrow is Peach's last day of school - half-day, actually. After the GGMS annual year-end drum circle/hootenanny, I'm taking her for a "lady lunch" at the restaurant of her choice (I'd bet on Italian), and then we're off to find her some new shoes because guess what else what else? My baby girl can pretty much wear a Ladies 7. So if Prince told her to act her age, not her shoe size? It would pretty much be the same thing. When did this happen?! I was still trying to digest the fact that when we last bought several pairs of shoes at once, she measured a Kids 3, which the salesperson told us was equal to a Ladies 5. Who wears that, BTW? Miniature ladies? Anywho, after noticing that both of her big toes were constantly red, I asked her if her shoes hurt and she said, "Well, kind of." And when I asked her which shoes hurt, she said, "Well, all of them, except maybe the flipflops. But my heels get scratched up when I wear those because they hang off the back." I am the worst mother on the planet.

Meanwhile, Olive is living it up in Sand and Stoneio with Mama Turista. This is her first her solo trip, and the only thing she was worried about was she could only stay four days instead of ten. They went shopping today, and when MT was having trouble finding some shirts for our trip to Colorado, Olive looked up from her dressing room duties of putting everything back on the hanger, lest anything should touch the floor or go unbuttoned or unzipped, and said, "MT. I think I know what the pwobwem is. It's those big cantaloupes you have there." Then she gave 'em a good squeeze for emphasis.

Two more days of The Packing and The Locking Down of the House and The Flooding of the Yard, and then we're off to the Land of Lows in the 20s and Highs in the 60s. With a touch of the Altitude Headaches, but who cares?!
Posted by La Turista at 9:28 PM No comments:

No, I Don't Have a Crush on Jane Fonda 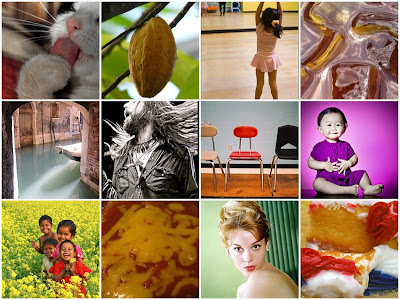 And P.S., I rearranged the pics for balance and OCD-related issues and to make it harder for you to match them with the questions. It's Day 2, what can I say?