Happy Half-Birthday To Me

Six months from today, I'll be hitting the Big 4-0, and guess what I got to celebrate this auspicious occasion? Yep, acute biceps tendinitis with a little bit of thoracic outlet syndrome thrown in. Pretty much what I self-diagnosed off of WebMD (I AM a doctor, remember), but my PCP (no, not the angel dust, the other one) confirmed my findings this morning. It's been bugging me for over 6 months now, but what with the sling/ass busting incident in New Orleans and my left hand repeatedly going numb while driving(!), I decided to call for a consult. So now I get the pleasure of several sessions of physical therapy and a round of oral cortisone. I'm not gonna get hair on my boobs or anything, am I?

Also, it's my broham's full-fledged birthday today, so Feliz Cumpleanos all around. We're exactly 4.5 years apart, both born on Tuesdays, even. Which I'm sure you already guessed based on my incredible gracefulness.
Posted by La Turista at 4:36 PM 1 comment:

Actually, not exactly presto, but definitely change-o. The Great Living Room Makeover of 2008 is now complete! Ever since we built this house over 2 years ago, the plan was to someday get a new, bigger couch, maybe some chairs, maybe a rug, or whatever to change up the living room. See, I'm a big fan of COLORES en la casa, but I wanted to do the living room in neutrals, even though some would say that I'm taking my sanity into my own hands by putting light-colored upholstery anywhere near anyone under the age of 35. Well, screw 'em cuz I did it.
Over the last year or so, I've been collecting the pieces to the puzzle, bit by bit. First the wood and wicker chairs, then new fabric for the ottoman/coffee table, then the jute rug, then a new tablecloth and pillows. I was satisfied with that for the time being since, due to The Great TV Debacle of 2007, when our small couch got moved upstairs to the gameroom, I had reconfigured the room with just the two chairs, the ottoman, and a table. But then we got the new Big Ass TV downstairs, and for extended viewing, the chairs weren't nearly as comfy as a couch, and that GD Pottery Barn catalog kept showing up in my mailbox, taunting me, and so now here we are. Yes - it turns out that not only did I get my awesome vacuum for Christmas, I got this, too: 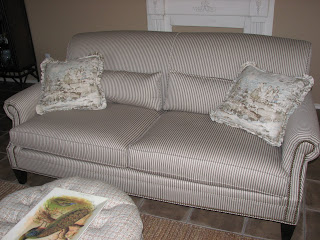 It came yesterday, and I almost slept on it last night I love it so. It's hard to tell in the picture, but it's a brown and off-white ticking, and it's quite deep. Our living room isn't that big, and the piano takes up a good bit of one end of it (I have plans for that, too ... someday), but something about all the neutrals in there now makes it seem bigger. Anywho, I'm pleased as punch. Which will not be allowed in this house until I Scotchguard the shit out of the new couch.

Posted by La Turista at 5:28 PM No comments:

What's a Paperboy To Dooooo?*

I know, I know. Can it. I've spent the last week trying to get the whole famdamily back on the school/work schedule, and we're all exhausted. It seems that The Holidays really take it outta ya, but I think we're back on track because after the alarm went off this morning, there was no crying, complaining, or teeth gnashing to start the day. And the girls did pretty well, too. 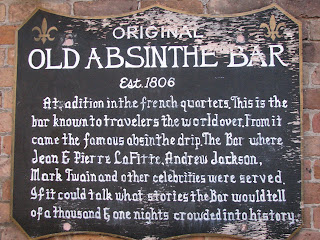 has been replaced by this: 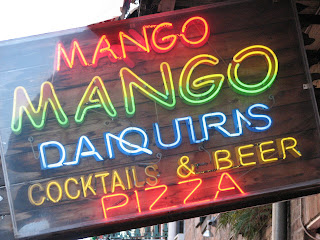 which was one of like three or four on Bourbon Street alone. Looks fun, right? 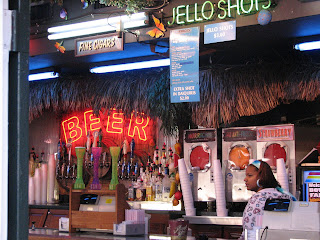 Please. We actually didn't spend any time on Bourbon Street other than to take these pictures. But I did see my favorite T-shirt hanging in a shop down there: I got Bourbon-faced on Shit Street. It was one of the few that didn't have some anti-FEMA slogan or bizarre sexual reference to Katrina on it.

So I missed my girls something awful, but I enjoyed spending time with the hubs, too. The whole time we were there, we kept thinking about how fun it would be to bring Peach and Olive sometime and all the things we could do with them. I also made some mental notes for when T-Bone hits the Mega Power Ball Multi-State Super Freakout Lotto and we want to buy a little place in the Garden District. He really is very lucky, so it's good to be prepared.

* If you haven't seen the "Oh, Streetcar!" episode of The Simpsons, go. Now.

Expanding on a Theme Here

We're back. And after eating my way from the Mississippi River to Lake Pontchartrain and back - several times - I decided to go with something light for breakfast this morning. And then I thought tohellwithit and ate TWO of T-Bone's delicious homemade yeast rolls with some Steen's. Take that, Annual New Year's Resolution #1.

Trip report to follow once I get all this Christmas nonsense picked up. Assuming, of course, that my left shoulder does not completely fall off, which, as we speak, it is in great danger of doing. And how's YOUR 2008?
Posted by La Turista at 8:49 PM No comments: