You know what I rawked out to in the car this morning? The One Thing by INXS. LOVED that song. WORE OUT my Shabooh Shoobah CASSETTE tape. While shaking my SPIRAL PERM, even.

Then I remembered that I saw INXS headline one of the most random concerts I've ever been to. The supporting acts included Ziggy Marley? And ... Guns 'n Roses! Wait, what?! Yes, friends. Axl and his nasty white football pants were OPENING for Michael Hutchence and all his smoldering hottness. And that really harshed the mellow of the freaky dude a few rows over from us, (the only person in that section, by the way), who kept yelling, "Do you know where you ARE? You're in the JUNGLE, motherfuckers! WHOOO!" I think he finally had to be carried out at some point. It was all so weird.

And the weirdest part of all is that T-Bone was there, too, and can probably remember every band's exact set because he's some kind of savant like that. Somewhere in that teeming mass of humanity, he was there with some of his boyz, and I was there with the biggest asshole I've ever known. But flash forward nearly 20 years, and here we are, about to celebrate 10 years of marital hilarity. More on that later ...
Posted by La Turista at 9:57 PM No comments:

So Thanksgiving with the in-laws was nice, but on the way out there, I got a call from my cousin that my grandmother had fallen and dislocated her shoulder. Truly, after being assured that she was at the hospital and that she was okay, my first thought was, "Please God. Don't let her be wearing that old green nightgown with the ripped out neck that my aunt keeps telling her is too long and is going to trip her up and make her fall and break her hip. Because if she is wearing that damn thing, we will NEVER hear the end of it." If you knew my aunt, you'd understand. Fortunately, my grandmother was in fact NOT wearing the dreaded nightgown at the time (although she had been wearing it earlier - whew) but was dressed up for yet another funeral (she's like a groupie or something), and her shoe just grabbed the rug as she was walking by the buffet. But, ever the thoughtful hostess and responsible Ladies Guild member, even as she waited for my other aunt to take her to the emergency room, she had the wherewithall to call another Guild member and ask her to pick up the chicken she was supposed to bring to the KC hall for after the service. However, our wilted magnolia poured it on a little too thick when she told my aunt on the way home from the hospital, her right arm immobilized in a sling (on the day before Thanksgiving), "Well, I think I can still chop with my left hand." Easy there, Scarlett.

In other medical news, my niece finally decided to grace us with her presence and cooperated rather quickly when my SIL was induced yesterday morning, 9 days overdue. God love her. I spent the morning with the little princess, and she is, as expected, deliciously cute. Now we're four for four in the granddaughter category for T-Bone's folks, so I think it's safe to say that my MIL has sufficient opportunity to indulge any pink and purple fantasies she may have missed out on as the mother of two boys.

Speaking of the proud new papa of two, my BIL, and fellow thespian, has a scene in the Coen brothers' new movie No Country For Old Men, so go see it and look for him in a scene with Javier Bardem, Stephen Root, and a shotgun. That's all I'm saying.

Except for this: Guess who I saw in the candy aisle at Target today? Yes, it seems our pocket-size favorite son has a sweet tooth. Who knew.
Posted by La Turista at 7:56 PM 1 comment:

I Know It's Early, But This Can't Wait

Because it's my duty to point out the most tasteless and/or creepiest in holiday decor, I need to bring this to your attention, spotted today at the Hallmark store:

Why, it's Chatty Cathy. And I swear to Jeebus that when I pulled the string in back, she screeched, "I hurt myself." I nearly wet MYself from fear.
There's also this prankster:

Just pull his finger, and wait for the magic. And really, just scroll down this whole page, because they got millions of 'em! Including this angry fella:

For the hunter/gatherer/survivalist zealot in your life:

And finally, from the Marie Osmond QVC collection, may I present, "Kissy Under the Mistletoe," or "Something From My Childhood Nightmares:" Yours for the low low price of $119.25. Plus the cost of YEARS of therapy.
We're off to see the in-laws unless or until my SIL decides to let loose her cervix and let that baby out already. So have a Happy Thanksgiving, y'all!
Posted by La Turista at 5:17 PM 2 comments:

And I Know Comedy

Ten Things That Made Me Laugh In The Past Five Days:

Posted by La Turista at 8:11 PM No comments:

Speaking of private parts (Wait, were we?), I was driving behind an SUV today that was covered in those "My Kid is #9 on the Synchronized Bullshitting Team" or whatever, and I noticed that one of the stick figures in the family portrait in the right-hand corner was a cheerleader. And then I found her corresponding sticker in the left-hand corner. It was a megaphone sitting on the ground with a pom pom on either side of it. Think about it. Draw it out if you must. Now, you ain't gotta be a 12 year old boy to figure out what THAT looks like. And it had Mhykayelah's name on it, too. Ewww.
Posted by La Turista at 8:14 PM 1 comment:

When we moved into our house two years ago, we finally had enough room for the baby grand piano from my parents' house, and Peach and Olive have been fascinated with it ever since. We've spent a lot of time banging around and playing chopsticks and the like, but I've also been giving Peach actual lessons here and there. My mom saved every bit of music I ever played, so the piano bench is a virtual time capsule of all of my old song books, theory books, and sheet music. Oh, the sheet music.

My piano teacher was the sweetest little grandma lady you'd ever want to meet, and I loved going to her house for lessons because she had hard candy all over the place, and she always kept her pencils perfectly sharpened. Every once in a while, she would take suggestions from me on songs I might like to learn, and she would get me the sheet music. So, unearthed from the piano bench, here are some of my brilliant suggestions: 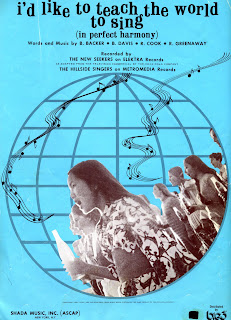 What can I say. It was the 70s, and I liked that commercial. I never did quite master playing it, but I could sing the shit out of it. Speaking of ... 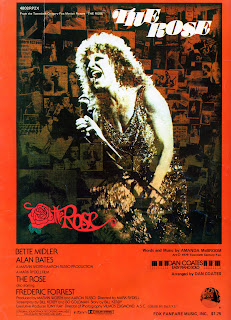 Kinda ashamed to admit this, but I've never seen the whole movie. Same thing with the Babs version of A Star is Born, but I wore out my parents' soundtrack album anyway. Yes, children of today, ALBUM. 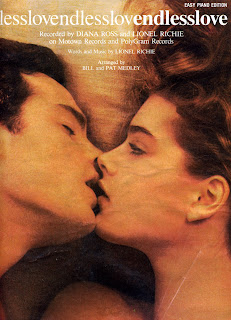 I was really more of a Blue Lagoon gal, so I've never seen this movie either, but apparently I could not resist the lyrical genius of one Mr. Lionel Richie. How else can I explain this: 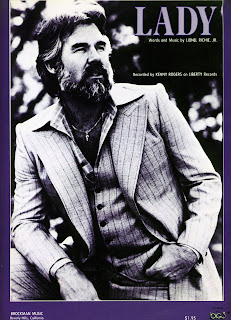 Holy shit. I can't believe I ever actually said, "Um, I think I'd like to learn, "Lady" by Kenny Rogers." He's so HAIRY. And friggin OLD. And CREEPY. Nice suit, though. 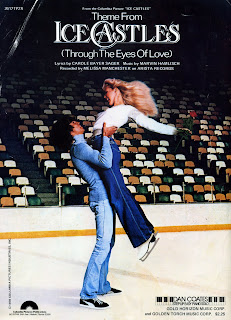 Now this one, I KNOW I asked for because I loved that movie. I can still see myself at the piano, wearing my headgear and rainbow terrycloth romper, quietly weeping as I think about how Robby Benson's love helped Lexie learn to skate again. Need a picture? Here: 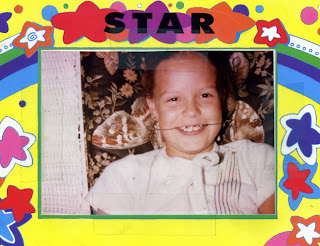 I've got bags full. Three gallon size Ziploc bags full. What with the haul Peach and Olive came home with on Halloween, and the half full giant bag of DumDums I bought for trick-or-treaters, we're pretty flush in the sugar department over here. And as much as they covet dessert and all things sweet, Peach and Olive really enjoy the idea of it all more than the real deal. We still had candy from last Halloween at Easter, we never get all the way through a batch of homemade cookies before they have to be tossed, and the birthday cake they nearly lost their minds planning and preparing for T-Bone sits half-eaten in the icebox. And it's not even like they forget about it. It's more like, "Oh yeah, there's the cake. So can I pleeeeeze have a chocolate kiss?" Really - that's all it takes. One, and they act like they've just won the food lottery. But their mama, on the other hand, is all about that birthday cake drying out in the icebox and figuring out how soon I can finish it off. This, ladies and gentleman, is how I keep my girlish figure, and by "girlish" I mean "how far along is she?"

And even though last week I was cursing the retail industry for shoving Thanksgiving aside and plowing on through to Christmas, the cooler weather has started giving me The Fevah, and I've already planned out when I'm going to start decorating. If all goes well, and barring any Nutcracker crises, I should be done by December 2nd. I'm weak, I know, but something about Peach and Olive asking to hear "that CheeChiChong Christmas thing" on the way to school today put me over the edge. I mean, how can I resist Olive, in her best Cheech voice, saying, "Yeah - Santa's old lady was reeely fine. And she made the BEST brownies."* Come on, Beto!

* Clearly, she is completely unaware of what that actually implies, so calm down. But again, it's the dessert thing.
Posted by La Turista at 8:16 PM No comments:

I did it! I successfully fought the urge to post yesterday and thereby guaranteed that I would not fail in any misguided attempt to participate in NaBloPoMo. Because really, who are we kidding? I'm not capable of posting every day for a week, much less a month. So that's it. Moving on ...

Let's see, what else? I made it through the week, which included 4,000 loads of laundry today and three fruitless trips to various nurseries in search of the Tuscan Blue variety of rosemary. I mean, come on - NObody has it? Also, my SIL refused to cooperate and have that baby yesterday, so we're still waiting. My car just hit the 200K mile mark, and I've got to drive it 'til the wheels fall off, or T-Bone will guilt me into getting something smaller. We have a family of owls in the trees right next to us, and man, those guys are LOUD with all the hooting. Oh, and I'm pretty sure our house is haunted.

Have a great weekend!
Posted by La Turista at 10:38 PM No comments: