So we're off to the in-laws for Thanksgiving. They're actually moving here in two weeks, so this is the Last Hurrah in the old house. They've been talking about moving since I was pregnant with Peach, so yeah. It's time.

Also, we've got this going on: 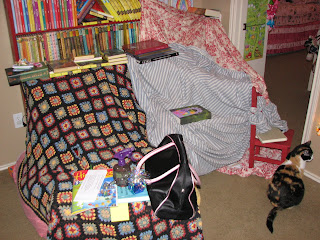 Fort with Cat and Books

Somewhere, I'm sure the Pilgrims are smiling. And probably coughing, because that first Thanksgiving? It was wicked cold.

Happy Happy to you and yours!

Why oh why do I always choose the holidays to reorganize the house? Right in the middle of decorating? Yes, I started last weekend. Shut it.

Actually, it’s the perfect time to tear the house apart because I’m already dragging everything out of the closets to get to the decorations anyway. AND what better time to go through the toys then right before we’re about to add some new ones? So really, it makes a lot of sense, no?

Peach and Olive are pros at the Keep/Pass game – we play it so often around here. Certain things I’ll keep forever no matter what, but, por ejemplo, they decided they were ready to let go of Strawberry Shortcake and her posse of fruit-flavored friends. Also, about seven blond Barbies are hitting the road – including the three that “talk,” praise Jeebus – them and the Volvo station wagon they rode in on. We’re left with Cinderella and Tinkerbell plus a multi-cultural rainbow of gals and, of course, the fabulous Ken. Peach is really my Barbie girl – Olive has this thing about doll hair, specifically blond, in that she says “it stinks” and it totally makes her gag. It’s the weirdest thing. She really cannot be around that “stinky hair” or she gags to the point of almost puking. Sweet Peach always warns her if a blond is coming out of the box, so she can busy herself elsewhere, but if it were me and my brother, back in the day? I would SO be using that to my advantage. He HATED Barbies, any Barbies, so evil little La Turista would chase the child down with them, line the doorway to my room with them, and once, even put some in his bed for a joke. I seem to recall Mama Turista not thinking it was so funny.

In this Age of The Internet, and especially the social networking explosion, I find myself wondering how it is that some people can still remain completely hidden from view. And I mean people who would seem to have some access to a computer or, at least, other human beings. I’m thinking specifically of people who were once part of my life and now I have absolutely no idea, not even a general sense, of how or where they are.

Obviously, as we go through life, our inner circles bend and even break over time. People move on, move away – but it would seem that that “thing” that brought us together in the first place still remains. Somewhere. Right? And it would seem that through common friends, places, or interests that we would have to cross paths at some point, virtually or otherwise. Right? It’s a small world after all.

I realize losing contact with people is a fact of life, but when I can find out in an instant what my second grade teacher ate for breakfast this morning, I would think I could find that girl I took ballet with for eight years who was destined for New York and The Great White Way. I mean, did she make it? And what about that guy I went to school with who said, every day, K-12, that he wanted to be President of the United States? Does he still say that? Because that’s the kind of guy that actually does it.

So random, I know. But T-Bone and I discussed this over beers at The Highball the other night, and I’m still trying to sort it all out. He, BTW, is on Facespace but is perfectly content to never update his status or request friends or do anything other than share music with his regular cronies. And even though I’m not on Facespace myself, I’m in regular contact with plenty of people who are, as well as many other living, breathing human beings, so if any of The Missing I’m thinking of really wanted to find me, they totally could.
Posted by La Turista at 4:31 PM No comments:

Friday, I awoke with what I thought was more of The Strep Throat, but it just turned out to be The Sore Throat with the Hacking Cough. Which the crisp night air at our block party did wonders for - by 10 pm, I was voiceless. But we met some cool new neighbors, and I was able, through sign language, to say how much we enjoyed having them all over.

Saturday, I took Peach to Nutcracker rehearsal and tied up some loose ends in preparation for Halloween and T-Bone’s birthday. After Mama Turista’s homemade cheese ravioli dinner, costumes were donned, and battle stations were manned. Peach was dressed as an obstetrician, with regulation scrubs, cap, stethoscope, and a newborn baby doll with the standard-issue hospital knit cap. Olive was a bumblebee, although she was very tempted to wear her pony costume from last year – apparently once a week, every week, is not quite enough.

We usually have quite a few trick-or-treaters, including some truckloads from points beyond the neighborhood, and this year was no exception. We ran out of candy around 8:30, but that didn’t stop the boldest of the bold from ringing and knocking until 10 pm. BTW, isn’t the International Sign for “No More Candy” a pitch-black porch? Thought so. And when did the ringing of the doorbell become accompanied by the immediate beating down of the door? Back in the day, we NEVER went to houses without porch lights on and we rang the doorbell ONCE, NEVER knocked on top of that, and LEFT after patiently waiting about 30 seconds. So what’s with all the urgency? Also, to those of you parents who insist on dressing up your babes in arms (fine) and strolling them around to “trick or treat” (please), I just have to say – really? We’re not giving out stacks of money here, y’all, it’s effing CANDY. Which, from the looks of things, many of you have a year-round relationship with anyway, so quit using your baby to extort Smarties from me and just calm the hell down. P.S. I love Halloween.

Sunday was T-Bone’s birthday – the Big One – and Peach and Olive made him breakfast in bed (cinnamon toast). I gave him a certificate for a Level Nine tour at Space Center Houston this spring. Fingers crossed, we’ll break bread with some real astronauts, for whom I’m sure he’ll have muchas preguntas. After that, Mama Turista and I ran some errands and went to see “This Is It” – which I LOVED. I wore one of my MJ pins even. Later, T-Bone and I met the Televisions for a joint birthday dinner at Lambert’s (meh), and stopped by The Highball* for drinks afterward (hoppin’ for a school night). The Boyz have big plans for Friday night (it’s Mr. Television’s birthday, too), after which I’m sure they’ll feel officially “in their 40s.” Lord knows I do, after this weekend.

* Note to Temperance Society girls – the fries and rings are now “reduced” to 7.50 a bowl. Think of the savings! And we saw Karrie having drinks with the chef and presumably discussing the difference between chicken and dumplings and matzo ball soup. Ahem.
Posted by La Turista at 8:58 PM No comments: